Storm drains are designed to carry clear water waste from rain water and some specialty fixtures. Typically, large flat roofs will require a storm drainage system to remove trapped water, as the weight of the water could quickly damage the structure of the roof in a heavy rainfall; to prevent this, rain water roof drains are installed to drain the water to a leader, then to a storm building drain, and then finally to the public storm water disposal system. 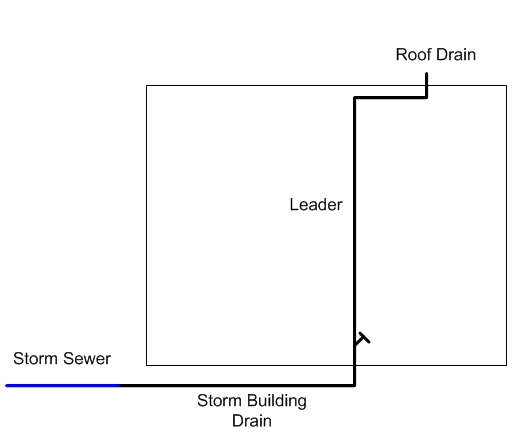 In residential construction, storm water is less of a concern, but still requires some provisions to prevent basements from flooding. When the foundation walls are completed, a perforated pipe called Weeping Tile, is placed around the footing; this will trap and drain away any ground water before it can penetrate the foundation. The following pic illustrates how Weeping Tile is placed around the Foundation Footing. In this pic, the Weeping Tile is wrapped with cloth, to prevent silt from entering the pipe (Weeping Tile). Gutters and downspouts may also be connected to the weeping tile or drained away from the foundation. Weeping tile, where available, is connected to a public storm system, but in rural area's, the water must be drained to a low area; such as a ditch, French drain or pumped away with a sump system. Roof drains come in dozens of different types and configurations to suit any conceivable situation, but there are two basic types; normal, which are completely open, and flow controlled, which limit the amount of water drained. The area of a flat roof and the maximum 15 minute rainfall for the area will determine the size and spacing of roof drains.

A rain water leader is the vertical drain(including any horizontal offsets) that carries rain water and clear water waste to the storm building drain. Rain water leaders are sized by the amount of water(in Liters) they are expected to be capable of draining. Leaders must be designed so that the expansion and contraction from intermittent temperature changes will not damage the piping system. As with sanitary drains, all rain water leaders must also be provided with a clean-out, located close to the base of the leader(within 3M).

In the following diagram illustrates the Rain Water Leaders for multiple roof tops, connecting to a Storm Building Drain, which terminates outside the building to the Storm Sewer.

A Storm Sewer is the extension of a storm building drain, beginning one meter outside the building. A storm sewer will discharge the water to a public storm system or another appropriate place where the water can safely drain away. Because storm drains are not permitted to contain sewage, they are permitted to be drained to any area capable of handling the discharge.

In commercial / industrial buildings, there may be numerous fixtures that discharge clear water waste and is not required to be treated. These fixtures may be indirectly connected to a storm drainage system(check your local code). Fixtures connected to a storm system must have their discharge rates calculated so the drains can be sized (usually given in Liters per second or Gpm). Some fixtures that typically discharge clear water waste are: