The following are a selection of commonly used well water terms:

Annulus – also known as the annular space, is the space between the well’s borehole and the outside of the well casing.

Aquiclude – an underground strata containing water; but due to its physical makeup (fine sediment, etc.) is incapable of producing water for demand purposes.

Aquifer – an underground stratum containing a suitable amount of water for demand purposes and located within a porous medium.

Aquifer (confined) – aquifers located below impermeable layers (confining beds); such as a solid rock or clay layer, are deemed confined aquifers and are typically under pressure. A confined aquifer may be capable of creating artesian well.

Aquifer (unconfined) – also known as water table aquifers. These aquifers are not covered by confining beds.

Aquifer capacity – the amount of water an aquifer can consistently supply under demand and maintain its level.

Borehole – the hole created by drilling equipment used to reach an aquifer or other substance.

Casing (well) – casing is a physical separation placed into a borehole that protects the well from the surrounding ground collapsing in. Casing is typically made of either steel or plastic pipe sized according to the requirements (4″, 6″ and up) of the well.

Cone of depression – the affects of an operating well pump on its unconfined aquifer, creates a cone shaped depression as the higher water in the aquifer moves to balance the water table. The horizontal distance the cone of depression extends outward from the well is considered its radial area of influence and should not extend into a neighboring well’s cone of depression.

Cribbing – any of a number of materials (wood, rock, concrete) placed around a dug well to prevent the ground from collapsing in on the well.

Deep well – is a well that is deeper than the practical limit (25 feet) of a suction pump.

Drawdown – the vertical distance water within a well will lower when the pump is running and is a measurement of the aquifer’s ability to replenish the well.

Drive shoe – is a protective open-ended steel section mounted to the bottom of well casing. The drive shoe prevents the casing from damage and collapse as it is driven into the ground. Drive shoe’s are either threaded to the casing or welded in place.

Drop pipe – is the vertical section of piping that descends into the well from the pitless adapter to the pump or well inlet.

Foot valve – is a mechanical check valve placed on the bottom of the drop line. The foot valve prevents loss of prime in the suction line by holding the water in the drop pipe.

Gravel pack – gravel that is placed into the well to aid in filtering small particulate around a well’s inlet screen.

Groundwater – underground standing water that fills the spaces between soil or rock formations.

Groundwater discharge point – an area that allows an aquifer to discharge its water to the surface. Some examples include: springs, lakes, ponds, rivers and swamps.

Hydraulic gradient – the rate of change of pressure head; in a well’s aquifer, per unit of distance of flow at a given point and in a given direction.

Hydrology – the study of the movement of water above and below ground.

Impermeable layer – is a layer of rock or clay that does not allow water to pass through it.

Percolation – the ability for water to move down into the soil or rock.

Pumping water level – the depth below ground a pump should be placed to produce the maximum yield of water from a well. This is determined by a well yield test.

Radius of influence – is the radial measurement of the affected water table outward from a well casing as the pump is in use. When the water around the pump begins to drop from use, the water table will begin to seek level and this is measured outward to the area where the water table is still at its standing level.

Recovery rate – is the amount of time it takes a well’s aquifer to replenish the well and is usually measured in GPM, LPM, LPH, GPH.

Sanitary well seal – is a fitting placed inside the top of the well casing to prevent contamination from entering the well.

Shallow well – a well no deeper than 25 feet from the pumping level to the pump’s center line as this is the practical limit of a suction pump at sea level.

Snare pipe – a threaded pipe that attaches to the pitless adapter to allow for the drop pipe and pump to be pulled.

Standing (static) water level – the distance below ground the water level maintains after fully recovering from any use.

Submergence – the distance below the water level in a well that the inlet, foot valve, injector or submersible pump is installed.

Turbidity – is the degree of cloudiness in the water, caused by fine silt and sediment.

Water table – the highest level at which water in the ground can be found by drilling or digging. This level usually fluctuates seasonally.

Well – a hole made by varying means into the ground for the purposes of obtaining water.

Well cap – is a cover placed atop the well casing to prevent animals and other contamination sources an easy access point to the well.

In this article, we will cover the different water well types s for your home,…

How To Rough-in A Toilet What's In A Plumber's Tool Box? 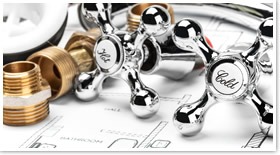